A wake of Red-headed vultures was pecking at a barking deer carcass poisoned with fatal insecticide as a tiger bait, hoping to fetch the top predator’s unblemished skin without bullet marks. Sadly, the majestic vultures were feasting on the last supper which subsequently led to the extinction of their species in Thailand’s wilderness. It was not merely a breed of birds that vanished from the jungle, yet the nature’s clean-up crew and disease control unit.

“With the fading of vultures comes the loss of crucial players in the ecosystem due to their efficient carcass disposal. Without them, rotting of wild animal bodies would be a breeding ground for such infectious and deadly outbreak as anthrax affecting cattle and potentially humans.”

It has been 30 years since Red-headed vultures have disappeared from Thai forests. At present, a group of people are attempting to breed them in captivity, being hopeful they will roam the sky again. The challenging project named “In Situ Recovery of Red-headed Vulture Population in Huai Kha Khaeng Wildlife Sanctuary” is the collaboration of four organizations, namely The Zoological Park Organization of Thailand under the royal patronage, Department of National Parks, Wildlife and Plant Conservation, Kasetsart University, and Seub Nakhasathien Foundation. The recovery attempt, nonetheless, is a Herculean task considering they are on the verge of global extinction. 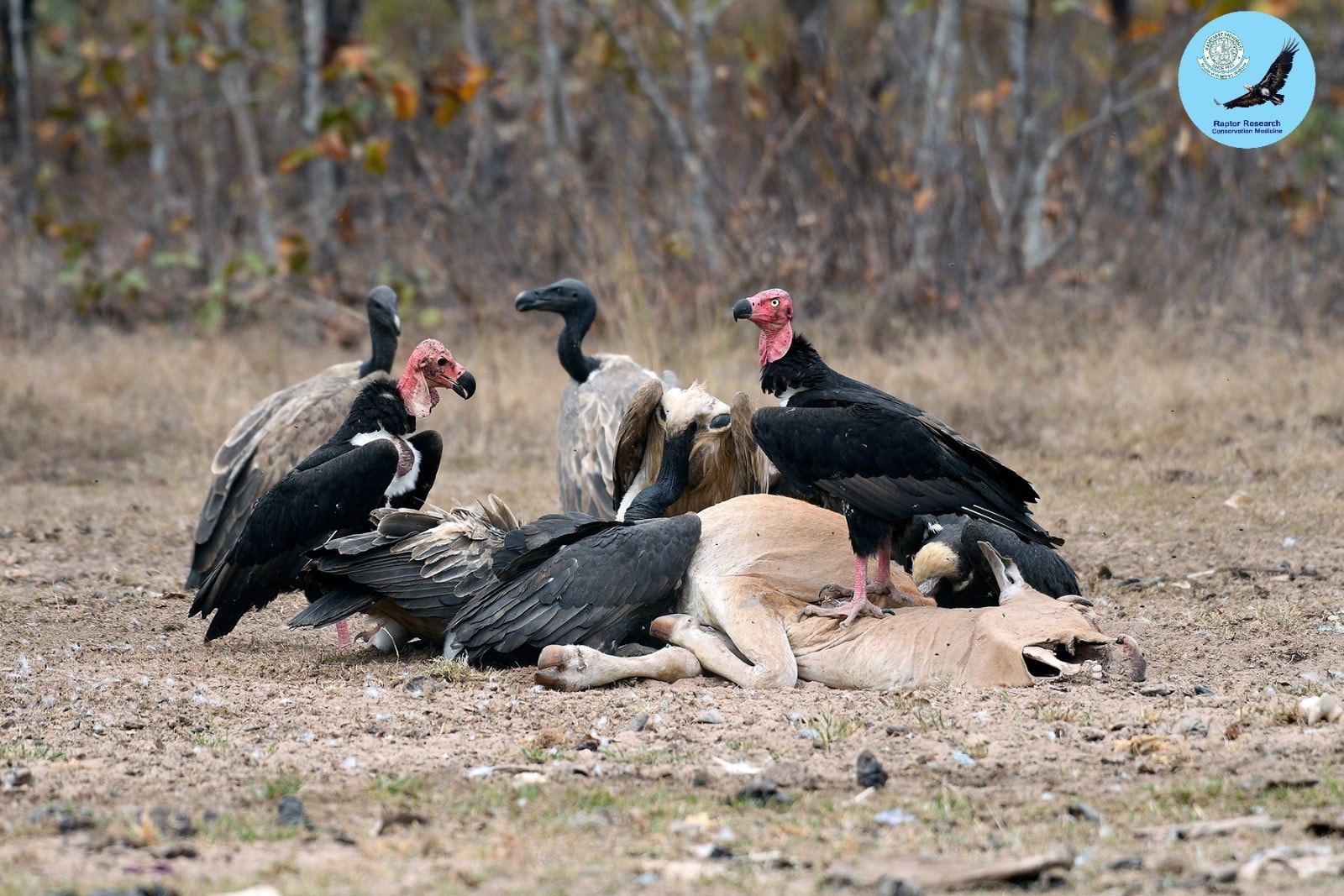 Despite the public perception about their ugliness and unsightliness, the existence of Red-headed vultures is astonishingly vital to our well-being.

Dr. Chaiyan reasons, “They play an important role in curbing the spread of diseases. A study conducted in Africa revealed that their stomachs are so acidic no major pathogenic organisms were detected in feces after they consumed anthrax-rich cow remains.”

Without them, nonetheless, the contrary is true. Animal carcasses will be a seedling host of bacteria, contaminating soil and water and exposing animal populations to deadly diseases that can be transmitted to other wildlife and humans in the ecosystem. The research conducted in India suggested a noticeable impact of the fading vultures.

“Over the past twenty years, an easily-produced and strong anti-inflammatory drug was used to treat hoof diseases in cows. Since Hindus abstain from consuming meat, dying ruminants were left to the natural decaying process rather than proper slaughter. Thus, predatory birds that fed on diclofenac-contaminated remains, found especially in liver and kidney, were prone to acute kidney failure, roughly accounting for 90% of death rate among White-rumped, Red-headed, and Slender-billed vulture populations in the Indian subcontinent.”

Dr. Chaiyan added that a common sight of near-extinct vultures pecking at cow carcasses was once seen in India. However, due to the catastrophic outcome of the diclofenac, it was being instead replaced by the growing piles of their remains.

“The perishing of natural disposers, i.e. vultures, sees the rise in rabies cases in which a growing number of stray dogs fight for plentiful carcasses, according to the same study.”

Their benefits in wilderness only bring harm unto themselves and explain why huntsmen loathe and even sometimes poison them, resulting in mass annihilation. Besides, toxins and lead from bullets used to slay their food also threaten the existence of Condors, the distant old-world counterparts in the Americas.

In Thailand, there are two major concerns facing the livelihood of vultures. First is the negative attitude. A symbol of bad luck and death, they are usually disposed of due to the all too familiar sight with filthy remains. Second is the diminishing food source. With the improved public health and proper cremation, human corpses and animal carcasses no longer litter the ground like they used to 50 years ago. Farm animals are processed, and the number of mammalian predators who naturally produced carcasses in the wild is declining, both affecting the share of carcasses sustaining vultures.

While Thailand used to be home to three indigenous species of vultures, including the Red-headed, none is left as a breeding resident today in the wild. This, however, is going to change in the future.

Before the Red-headed Vultures’ Flight

Although the Zoological Park Organization of Thailand succeeded in nursing and restoring the population of Sarus Crane, the same attempt with Red-headed vultures is difficult to accomplish.

“The breeding stock of five captive vultures poses the first challenge,” Dr. Chaiyan admits, referring to at least 50 pairs of Sarus Crane at the time.

“Next, bigger than eagles in size with wingspan of 2 meters in length, vultures have a low breeding rate, giving only one egg during the breeding season while survival from hatching to mating is just 25%. The recovery is thus slow when compared with that of Sarus Crane that can be artificially inseminated and reproduce up to a few offspring annually.”

During the past 20 years, ZPO has been unsuccessful in breeding a single Red-headed vulture, confirming that this is no easy task.

Chaianan Pokesawas, a zoo scientist at ZPO, reasons, “Unlike poultry or waterfowl with annual egg-laying cycles, vultures, even in captivity, must be in a promoting environment with sufficient food in order to lay eggs. The undisturbed nests on treetops and potential exposure to threats/stimulants are limitations that lead to a population recovery project in Huai Kha Khaeng Wildlife Sanctuary, their past natal land.”

“Back then, we focused on placing male and female vultures in cages. However, the experts made us interested in their health more, which is similar to a premarital screening. Even though Red-headed vultures have been in captivity under the care of ZPO for around a few decades, we have no idea how old they are exactly based on their life expectancy of 50-60 years. It was fortunate enough that we were able to treat the sick, make them healthy and proceed with the project.”

Besides rehabilitation and better proper nutrition, there was an attempt to improve the enclosure condition. The mating couple were repositioned from the exhibition zone to the rehabilitation quarter inaccessible by tourists. Being in a quiet environment and undisturbed, the pair named Tarn and Nui mated and the first-ever egg was laid in the past 20 years. Unfortunately, the egg broke due to a weak nest base lacking in twigs or possibly calcium.

“While knowledge about New World vultures in the Americas exists, the Old World counterparts are barely known, making it more complicated to fully understand them. Data was to be collected through close observations and trial and error to determine their courting and mating manners, including their nest material and food.”

Apart from Tarn and Nui, Pok and Ming are another promising match. The former, a male vulture from Nakhon Ratchasima Zoo, was to mate with the latter in Huai Kha Khaeng Wildlife Sanctuary. “Ming is our hope because she is very healthy and has exhibited mating desire for at least two consecutive years. Perfectly healthy, Pok was selected to replace her former sick and dead partner,” Dr. Chaiyan adds. 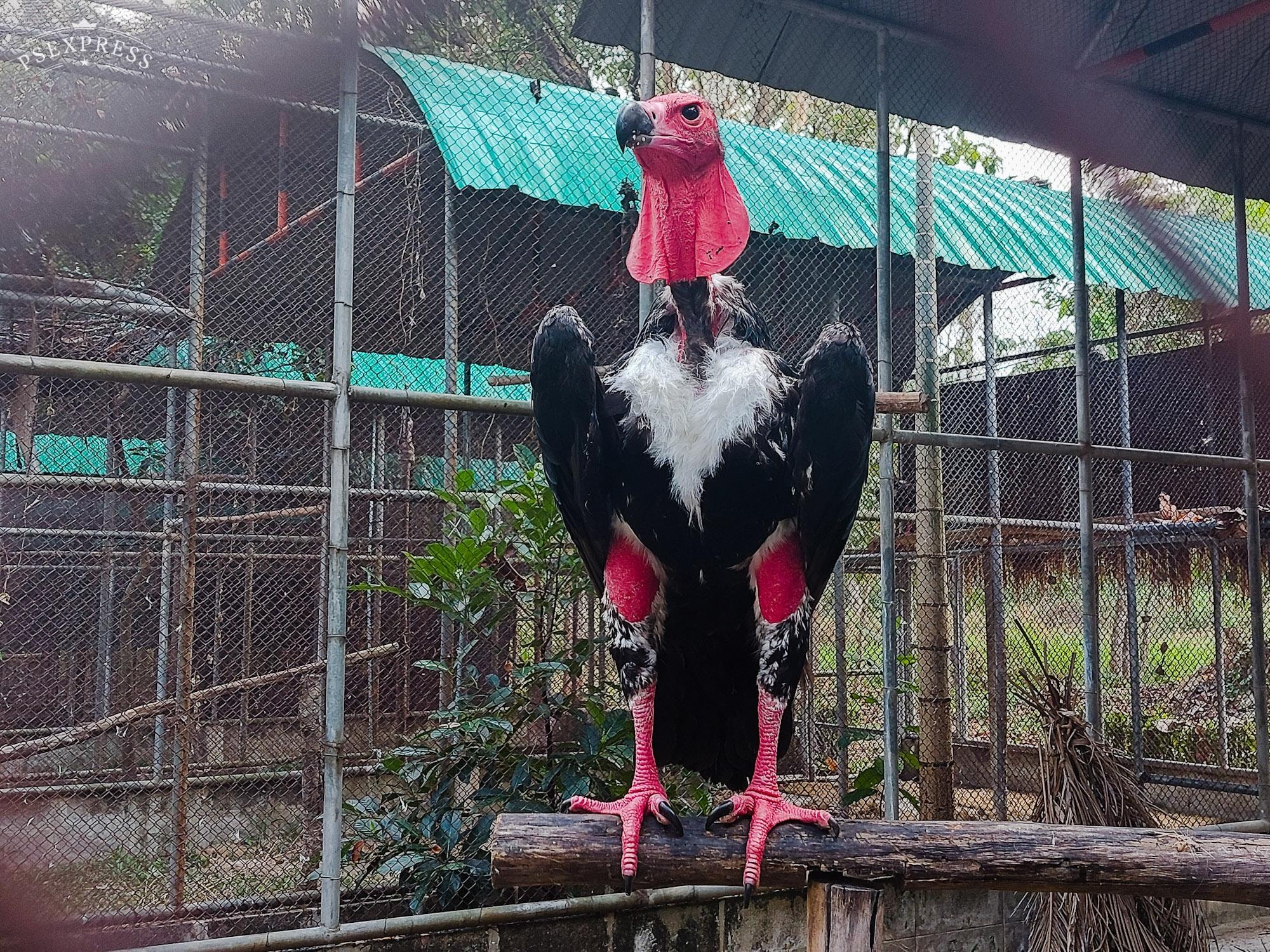 Ming, a female vulture in the cage for pair mating 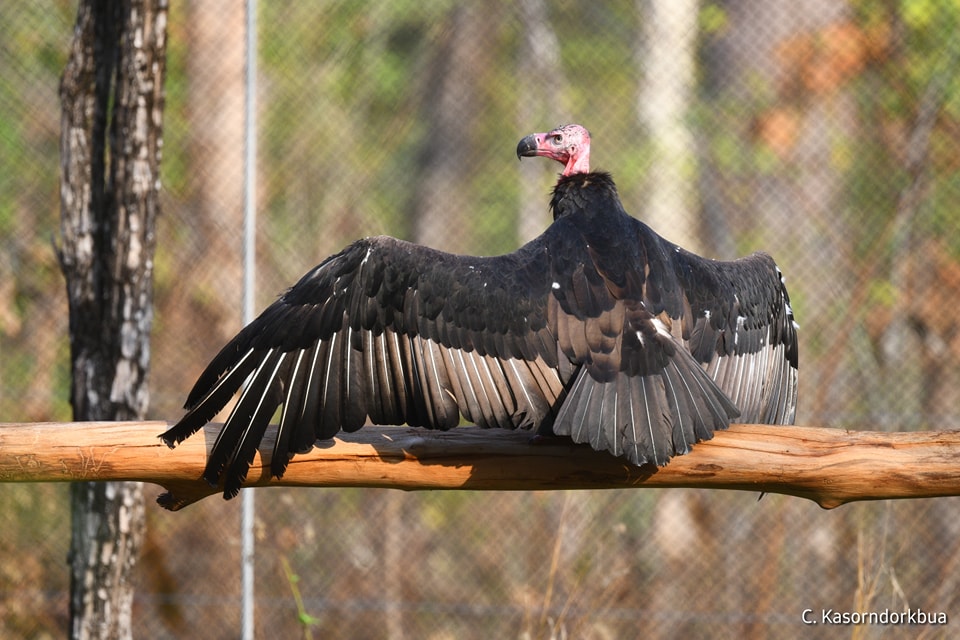 Pok, a male vulture in the breeding cage

The term “pair mating” refers to the practice of placing males and females in adjacent enclosures to establish a level of familiarity before being allowed in the same cage, as female vultures are normally territorial and dominant towards males. Researchers will observe their behaviors around the clock, and the clear sign of acceptance is displayed through mutual feeding.

The couple’s commitment will prompt a male to build their nest using twigs, which will then be inspected and decorated by a female. The completion of mating is dependent on the female's satisfaction with their loving nest.

This romance remains a developing story until the next mating season starting in October. By then, Pok will compete with Jack, another male to win over Ming, and the massive cage (40 meters long and 20 meters high) at Sub Fah Pah station, Huai Kha Khaeng Wildlife Sanctuary will have been established for newborns to learn to take their first flight in the wild.

Tending newborn vultures before their release is no easier than ensuring the appropriate environment.

Positive about the breeding success, Dr. Chaiyan predicts, “A lot of processes follow hatching. They would be trained to find food in nature, distinguishing edibles from non-edibles. Muscle training along with their massive and sharp beak and talons will be necessary for ripping and dragging skills on carcasses.” 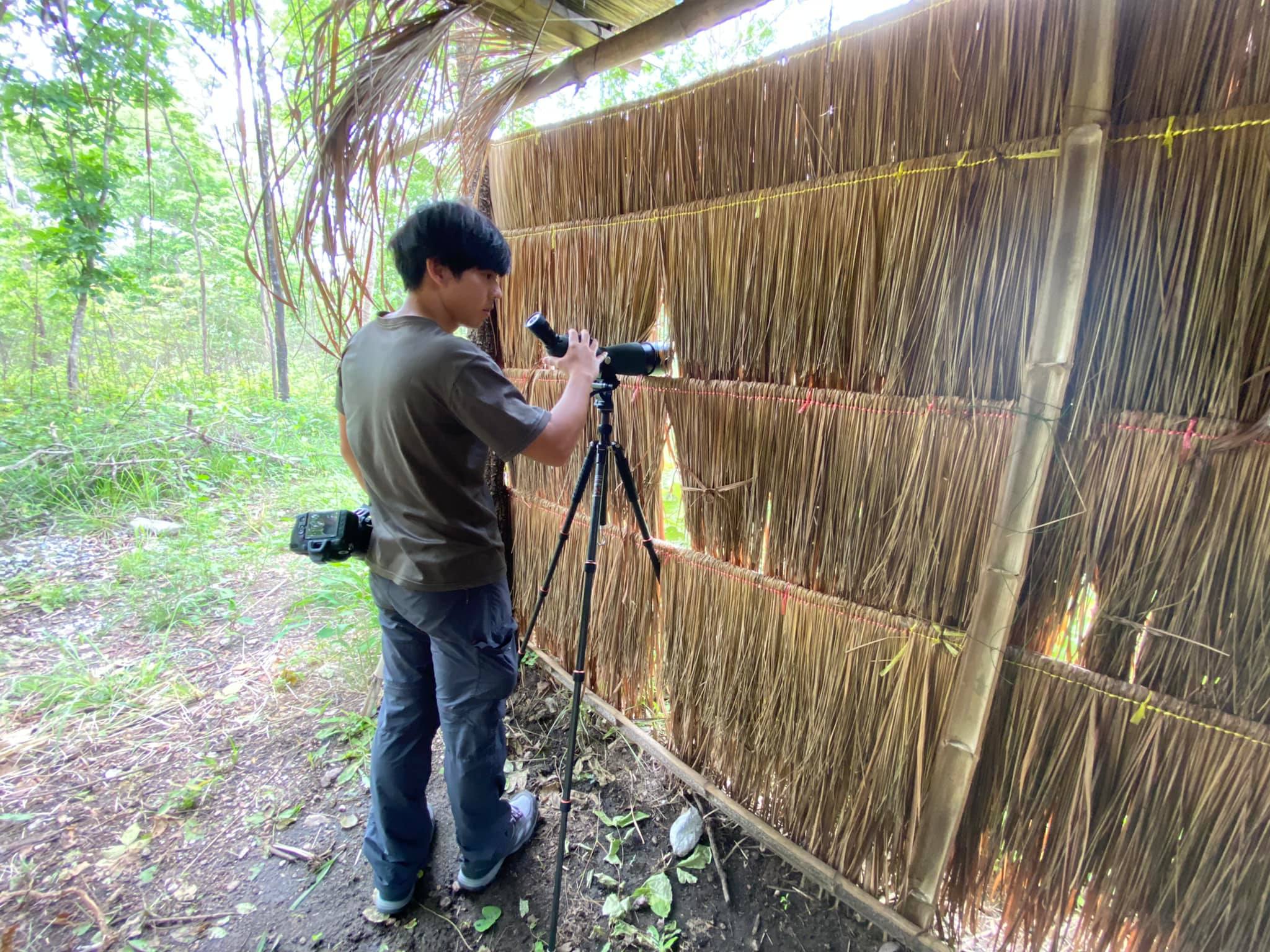 In addition, fledglings with sufficiently strong muscles will be released from enclosures away from humans to avoid human habituation, and tracked through satellite devices to collect crucial behavioral and ecological data for future analysis.

Food must be plentiful in the habitats of released vultures, which is directly reliant on the existence of tigers, the top predators in the sanctuary.

“Huai Kha Khaeng, their natal place, remains our only hope due to its high density of tiger population in Southeast Asia. Red-headed vultures thus depend on the powerful predators for hooved carcass remains as their food source. Recently, the Department of National Parks, Wildlife and Plant Conservation has tightened its control over the area to ensure the balance between the two species,” says Dr. Saksit Simcharoen, Head of Thailand Tiger Research Project at DNP, emphasizing why Huai Kha Khaeng is an ideal place.

Nonetheless, the mission would not be realized without the last factor, which is… 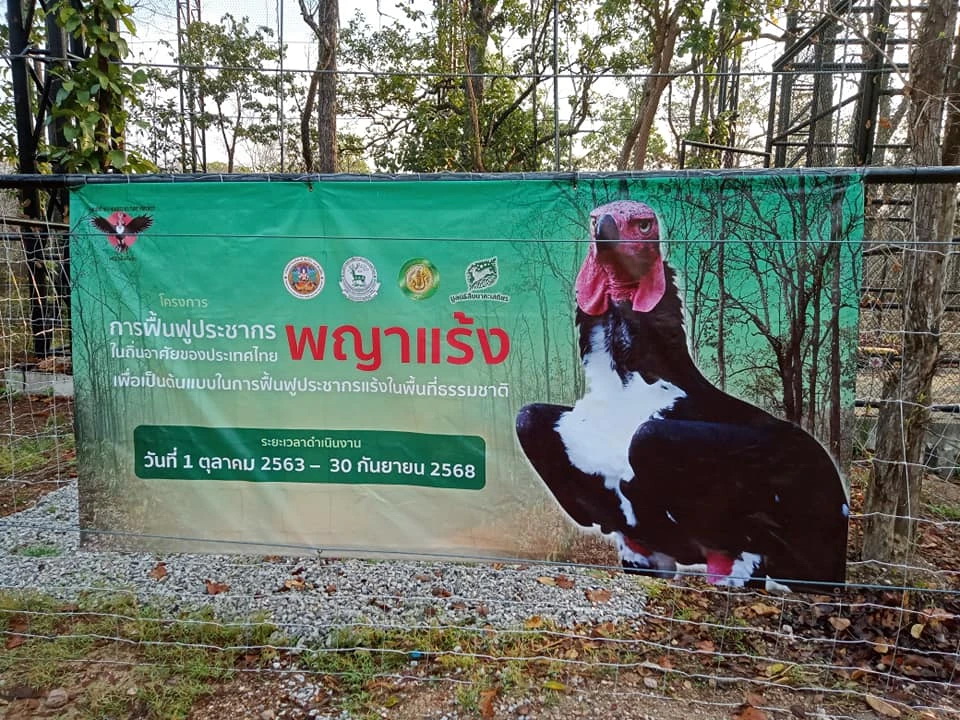 Should humans account for the death of vultures, predatory birds are destined for doom. Thus, Seub Nakhasathien Foundation is committed to creating the right understanding among the locals and public, changing their perceptions about the death Red-headed vultures symbolize.

“The foundation is responsible for three tasks: to inform and cultivate an awareness about the importance of vultures, to expand the network of conservation and volunteer effort, and to promote fundraising,” Onyupa Sangkamarn, Head of Academics Affairs, shares.

Regarding communication, it aims to address the public and locals alike, especially in Huai Kha Khaeng realm, Lan Sak District.

“The foundation will inform the public of the key roles that vultures play in the ecosystem via their Facebook page and website straightforwardly. Volunteers will then engage with the locals, educating them on their contribution to the food chain. At the monthly meetings, experts might be invited to share some useful information.”

The team also intends to commission the increasing volunteers to nurse vultures, prepare them food, clean their cages, and collect and record their particulars.

“While the public rarely recognizes Red-headed vultures, accepting volunteers will create an awareness, giving them a sense of importance by word of mouth. In fact, there was an attempt to survey the residents’ attitudes towards the species to relay the correct information, but that was disrupted by Covid-19.”

The ultimate goal to see their natural reproduction has a long way to go, which remains a great challenge taking many years to overcome. Besides, there is also an issue of genetic diversity to consider.

Dr. Chaiyan comments, “Unlike the Italian couple from the same family, we are fortunate to have the genetically different breeding pairs which will delay the problem of inbreeding for the next five to ten years. This challenge will be solved through collaborations between overseas zoos as the species is not permitted to be released in Europe’s wilderness due to its non-native status in the continent and the regulations imposed. The alternative is to request offspring from them to increase our breeding stock’s genetic diversity. We even already asked them to share their breeding expertise with us through a workshop next year.”

Facing this challenge, Onyupa said, “We are racing against the clock as the aging vultures are now at least 20 years of age. At our meeting, we even joked that we would carry on this project until we die.”

Their effort and dedication teach us a grim lesson of animal extinction—that is, the extinction can happen in the blink of an eye, but the reproduction will span many decades of hard work. 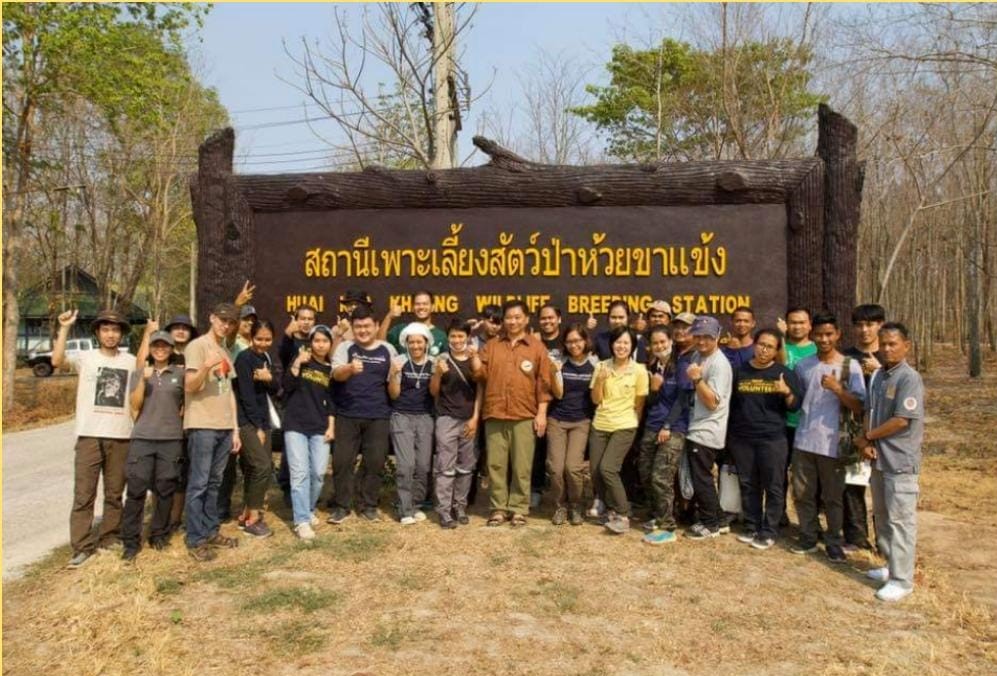